Having been cleared earlier in the year in another lawsuit concerning the supposedly suicide-inducing subject matter of his music, Ozzy Osbourne reinvigorated his sound and expanded his following with his sixth studio album, No More Tears, in the fall of 1991. Finding more sympathetic producers in Duane Baron and John Purdell to replace Roy Thomas Baker (who had helmed his last effort, 1988's No Rest for the Wicked), collaborating with Lemmy Kilmister of Motörhead on four songs, and retaining the services of guitarist Zakk Wylde, Osbourne brought his music into the '90s. Songs like "Desire" and "S.I.N." had an energetic, contemporary metal sound, and Osbourne effectively changed gears to turn out gentle ballads like "Mama, I'm Coming Home," which gave him his first U.S. Top 40 hit on his own. Not cowed by his court cases, he wrote songs about child abuse ("Mr. Tinkertrain") and serial murder ("No More Tears") from the point of view of the criminals. But he also considered his own place in the general scheme of things in the tribute to the rock & roll lifestyle "Hellraiser" and the reflective "Road to Nowhere." It all made for an unusually broad range of material, and the album returned him to the Top Ten and multi-platinum status. Greatest Hits is an excellent, thorough collection containing all of Journey's big hits, from 1978's "Wheel in the Sky" to 1986's "I'll Be Alright Without You." Although the songs aren't presented in chronological order and a handful of minor hits ("Suzanne," "Walks Like a Lady") aren't included, it doesn't matter, since every essential Journey single – "Only the Young," "Don't Stop Believin'," "Any Way You Want It," "Separate Ways," "Lovin', Touchin', Squeezin'," "Open Arms," "Send Her My Love" – is here, which means that it's all most casual fans will ever need. German hard rock veterans SCORPIONS will release "Get Your Sting & Blackout - Live In 3D" on Blu-ray on December 6 via Sony. The disc contains a recording of the band's April 15, 2011 concert in Saarbrucken, Germany using the latest 3D technology, 11 cameras, awesome 5.1. When Ian Gillan was recording his solo albums in the late 1970s and early '80s, Deep Purple's influence never went away. But Gillan did make an effort to try different things, and he was at his most experimental on Clear Air Turbulence. Enjoyable, if uneven, this album illustrates Gillan's willingness to take some chances. While the singer favors an aggressive hard rock groove on "Money Lender," the jazz fusion-influenced touches of "Over the Hill," "Goodhand Liza" and the title song could lead you to believe that you'd been listening to Weather Report and Return to Forever. Had Chick Corea formed an alliance with Deep Purple, perhaps it might sound something like "Over the Hill." Heavy metal and hard rock are in short supply on this album, which employs no less than five horn players and shows that Gillan didn't want to be a headbanger 100-percent of the time. Senjutsu (Japanese: 戦術, loosely translated as "tactics and strategy") is the seventeenth studio album by British heavy metal band Iron Maiden, due to be released on 3 September 2021. Senjutsu is the band's first studio album in nearly six years, following The Book of Souls (2015), marking the longest gap between two studio Iron Maiden albums. This is also their second double album and the second use of their original logotype (with the extended letters R, M and N) on the album cover since The X Factor (1995) (and following their previous use on The Book of Souls), as well as their first studio album since Powerslave (1984) to have no songwriting contributions from guitarist Dave Murray in any way, and the first since Virtual XI (1998) to feature multiple songs written by bassist Steve Harris alone. The first question one has to ask upon even gazing at the album sleeve of Paul Rodgers' Live in Glasgow in 2006 is, of course, has he still got it? That's like asking if Bob Dylan still has it, or Jimmy Page or Brian May or Ian Hunter. Hell yes he does! Recorded on the final night of a European tour, Rodgers and his bandmates, guitarists Howard Leese and Kurtis Dengler, bassist Lynn Sorensen and drummer Ryan Hoyle, lay down a tough, big sounding set of classics and more recent songs – including one new one – from his entire career and give them life, breath and fire again. We haven't heard live guitars sound like this in a long time, probably since the early '80s, nor have we heard blues-based hard rock in this way since the Cult's Electric album. 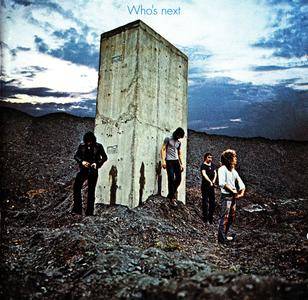 The Who - Who's Next (1971) Expanded Remastered 1995
EAC | FLAC | Tracks (Cue&Log) ~ 481 Mb | Mp3 (CBR320) ~ 178 Mb | Scans ~ 151 Mb
Classic Rock, Hard Rock, Psychedelic Rock | Label: Polydor | # 527 760-2 | Time: 01:18:00
A mix of old favorites and buried treasures makes this edition of Who's Next a definite must. One of the defining albums of 70s hard rock from one of the 60s most successful bands, the original album includes some of The Who's best-known work, such as the anthemic "Baba O'Riley" and "Won't Get Fooled Again", the by turns sorrowful and angry "Behind Blue Eyes", and perennial favorite "My Wife". The new tracks on this album are equally worth hearing, including "Pure and Easy" (an alternate edition of which is available on Odds & Sods) and the original version of "Behind Blue Eyes". A hard rock classic, Who's Next is required listening for rock fans of all ages.
70s Hard Rock Lossless Rock Classic Rock Psychedelic Rock CD-Rip + Scans FLAC MP3 The Who
Details Andalucia is the fourth studio album by Los Angeles rock band Tito & Tarantula, released in 2002. The album marked several line-up changes in the band, which had previously consisted of lead singer/rhythm guitarist Tito Larriva, lead guitarist Peter Atanasoff, and drummer Johnny "Vatos" Hernandez. This album featured the debut of lead guitarist Steven Hufsteter – who had previously played with Larriva in the Cruzados, bassist Io Perry, and keyboardist Marcus Praed. The band toured promoting the album for several years. They also filmed a music video for the song "California Girl". Rush - Gold [2CD] (2006)
Rock, Hard Rock, Prog Rock | EAC Rip | FLAC, Img+CUE+LOG+Scans (JPEG) | 02:35:29 | 1,11 Gb
Label: Mercury/UMe/Chronicles (USA) | Cat.# B0006322-02 | Released: 2006-04-25
Not as expansive as the impressive Chronicles, this edition of the excellent Gold series covers many of the greatest hits from one of Canada's top exports and finest contributors to the rock & roll tapestry. Largely covering Rush during the '70s and early '80s, Gold's track sequencing is wildly erratic with no real logic in place concerning how the songs blend into one another. But all of the hits are here, from the earliest "Working Man" and "Free Will" all the way up to the later MTV favorites. This covers pretty much all that a casual fan will ever need. Diehards will most likely own all of these songs thanks to Chronicles, but those who slept on that anthology would be well served in picking this up to fill holes in their collection.
Arena Rock Album Rock Rock Hard Rock Prog Rock lossless FLAC 2CD CD-Rip + Scans
Details Little Bitch is the third album by Tito & Tarantula, released in 2000. It was the band's first album not to feature bassist Jennifer Condos, and showed a major departure from their former style. Instead, they now incorporated the use of synthesizer moog pedals, giving the music a much stronger pop-rock sound. In addition, they recruited the assistance of several female backing vocalists on most songs, instead of relying on the other band members to back up Tito Larriva's vocals. This musical element is something the band also featured on their next album, 2002's Andalucia, which featured bassist Io Perry singing backing vocals on almost every song. The rest of the new elements featured on Little Bitch were mostly abandoned on Andalucia, which returned a sound more similar to that featured on the band's second album, 1999's Hungry Sally & Other Killer Lullabies. For some reason, the second Elf record, 1974's Carolina County Ball, was released under the title L.A./59 in the United States and Japan, while the more widely accepted title was used in the U.K. and Europe. The Ronnie James Dio-led outfit was becoming increasingly entwined with Deep Purple – Roger Glover was producing the band, they appeared on the Deep Purple-owned Purple record label in the U.K., and the group was working frequently with Ritchie Blackmore – and their music began taking on a more powerful, more complex, more Deep Purple-like sound because of it. The more or less straight-up boogie rock of the Elf debut was not entirely abandoned for this follow-up, but tracks like "Annie New Orleans" and "Carolina County Ball" have a depth that goes beyond the accomplishments of the group's previous, self-titled offering. Difficult to obtain, this long out-of-print release is a true find for fans of Rainbow, Black Sabbath, and Ronnie James Dio's best solo efforts of the '80s. Cats in Space - Diamonds - The Best Of Cats In Space (2021)
WEB FLAC (tracks) - 407 MB | MP3 CBR 320 kbps - 145 MB
1:00:57 | Rock, Hard Rock | Label: Harmony Factory
“REMIXED, REVAMPED…REMARKABLE” is the best way to describe this brand new compilation album from UK classic rockers CATS in SPACE. To be released this autumn, the 11 track clear vinyl LP and 14 track CD features the cream of the Cats’ catalogue but each song has been remixed and also re-vocaled by lead singer Damien Edwards. Amongst the grooves is an exclusive ‘live’ recording of the band’s epic anthem ‘Greatest Story Never Told’, which was the centrepiece of the band’s live stream concert recorded last year at KK’s Steel Mill in Wolverhampton. The CD contains a further three bonus tracks all taken from last year's smash hit album ‘Atlantis’.
“Whilst we know only too well that ‘tinkering’ with songs loved by the fans can be seen as risky, we feel that it’s a fantastic way to move the band forward, especially as we look towards working in Europe. Promoting all of our back catalogue on an official release with the new line-up, establishes the fact that, post lockdown, the Cats are looking to a new future and planning into 2022 and beyond”
Rock Hard Rock Cats In Space 2021 FLAC MP3
Details Say what you want about the Cult, a band who will certainly go down as one of the most schizophrenic in rock history, but singer Ian Astbury and guitarist Billy Duffy could sure write a great tune. Just glance at a few titles included on the greatest-hits collection Pure Cult: The Singles 1984-1995: "Edie (Ciao Baby)," "Love Removal Machine," "She Sells Sanctuary," "Wild Flower," "Fire Woman," "Rain," "Lil' Devil" – you get the picture. Spread haphazardly across the disc (rather than in chronological order), each track's uniqueness is even more evident, further showcasing the Cult's fearless creativity. Early songs such as "Spiritwalker" and "Resurrection Joe" will surprise most fans with their class and maturity, while later cuts like "Wild Hearted Son," "Heart of Soul," and "Coming Down" (from their disappointing latter-day albums) are given new life when viewed on their own merits.