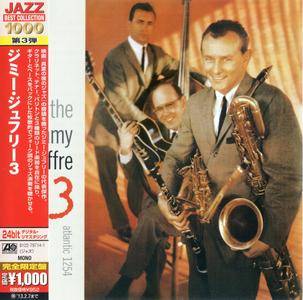 
Features 24 bit remastering and comes with a mini-description. Jimmy Guiffre 3 features the first version of Giuffre's 3. With guitarist Jim Hall and either Ralph Pena or Jim Atlas on bass, Giuffre is heard on clarinet, tenor, and baritone. The generally introverted music is wistful, has a fair amount of variety, and is melodic while still sounding advanced. In addition to the nine original songs (including the earliest recording of Giuffre's classic folk song "The Train and the River"). An excellent introduction to Jimmy Giuffre's unique music. 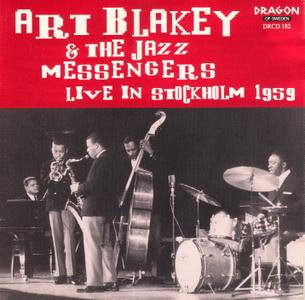 
The version of Art Blakey's Jazz Messengers heard on this LP differs from most of the period because pianist Bobby Timmons had just departed to join Cannonball Adderley, so Walter Davis, Jr. is in the piano chair. Otherwise the lineup (with trumpeter Lee Morgan, tenor saxophonist Wayne Shorter, bassist Jymie Merritt, and drummer Blakey) is familiar. Performing three standards (including "Night in Tunisia") and two group originals (best known is one of the earliest versions of Shorter's "Lester Left Town"), the Jazz Messengers are up to their usual high standards. Both Morgan and Shorter are in particularly strong form and Davis fits in quite well. 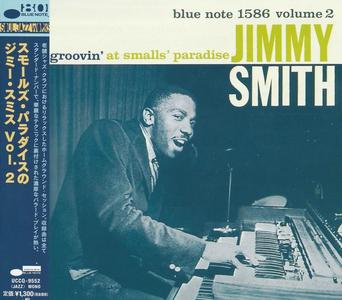 Groovin' at Smalls' Paradise is a live album by American jazz organist Jimmy Smith featuring performances recorded at Smalls' Paradise in New York City in 1957 and originally released in two volumes on the Blue Note label. The organ heard on this album is distinctive from most Jimmy Smith recordings in that the percussion on-off switch was either broken or Smith deliberately set the switch to a position halfway between on and off. This prevented the single-triggered percussion tone from decaying, Since the percussion tone is also not routed through the vibrato circuit, the effect is quite unusual. 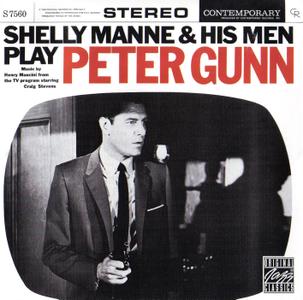 Henry Mancini's writing for Peter Gunn was quite significant, for it was the first regular television series to utilize jazz as an integral part of its score. Half a year after the show debuted, drummer Shelly Manne, the members of his quintet (trumpeter Conte Candoli, altoist Herb Geller, pianist Russ Freeman, and bassist Monty Budwig), and guest vibraphonist Victor Feldman (doubling on marimba) interpreted the Peter Gunn theme and nine selections from the show, including "Dreamsville." 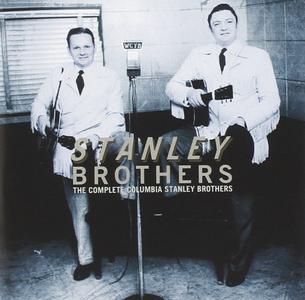 While both Carter and Ralph Stanley are musical treasures of the first rank, I have to confess that Ralph Stanley is my favorite bluegrass performer, and one of my favorite singers of any musical genre. Both brothers possessed prodigious musical gifts (anyone doubting Ralph's genius need only listen to his stunning a capella rendition of "O Death" on the O BROTHER WHERE ARE THOU? soundtrack to bring about a revision of their opinion), so it is almost impossible to imagine a greater bluegrass singing voice than these brothers. 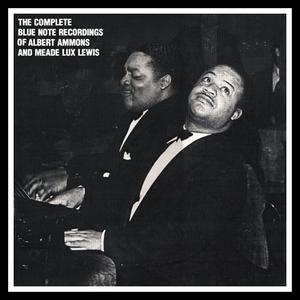 Mosaic's Complete Blue Note Recordings contains all of the recordings Meade Lux Lewis made for the label between 1935 and 1944, making it the definitive statement on the influential boogie-woogie pianist. This magnificent three-LP box set was issued as part of the first release by the Mosaic label. The out of print collection has all of the music recorded during Blue Note"s first session (nine piano solos by Albert Ammons, eight including a five-part "The Blues" by Meade Lux Lewis, and a pair of Ammons-Lewis duets) plus Lewis" 1935 version of "Honky Tonk Train Blues" and his complete sessions of October 4, 1940, April 9, 1941 (four songs on harpsichord), and August 22, 1944. 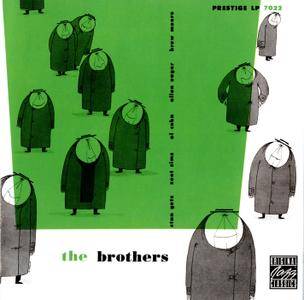 The music on this LP recalls the airy "Four Brothers" sound that tenor saxophonists Stan Getz, Zoot Sims and Herbie Steward, and baritone saxophonist Serge Charloff, plied in Woody Herman's band of 1947. For this outing, Steward and Charloff exit, and four become five with the addition of tenor luminaries Al Cohn, Brew Moore, and Allen Eager. The set appropriately kicks off with Gerry Mulligan's "Five Brothers," a tune reminiscent of Jimmy Giuffre's original "Four Brothers" in its fluid and bouncy arrangement. Three other attractive and similarly disposed originals (one more by Mulligan and two by Cohn) complete the saxophone session from 1949, all featuring swinging statements by each soloist. A 1952 sextet date led by Sims and Cohn is also included, offering up another round of original and buoyantly swinging cuts, bolstered by lively contributions from trombonist Kai Winding and solid rhythmic support by pianist George Wallington, bassist Percy Heath, and drummer Art Blakey. A fine release that nicely showcases the cool, proto-West Coast bop forged by both these soloists and Miles Davis. 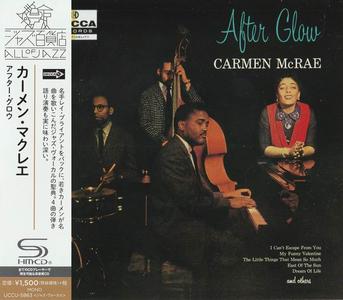 Sublime early work from Carmen McRae - done with backing from pianist Ray Bryant in a small group setting. Carmen's singing in a beautifully fragile mode - with only Ray's piano and a bit of bass and drums to back her up - and it's a real treat to her the McRae vocal approach in such an unfettered format, because even at this earlier age, Carmen had a sense of control, poise, and grace that shines through immediately. 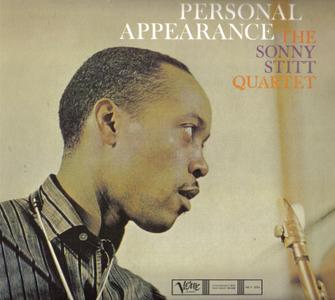 While the comparisons to Charlie Parker were inevitable throughout a good part of his career, Sonny Stitt was very much his own man. He is in top form throughout this 1957 session made for Verve, featuring a very young Bobby Timmons on piano, bassist Edgar Willis, and drummer Kenny Dennis. Alternating between alto and tenor saxophone in a program consisting mostly of standards, Stitt is equally at home on each horn. 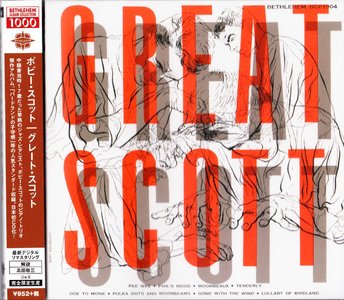 Reissue. Features the latest remastering. Includes a Japanese description, lyrics. Features original cover artwork. A rare early trio session from Bobby Scott – much looser and less arranged than most of his later albums, with a very strong focus on his talents as a piano soloist! The group features Whitey Mitchell on bass and Bill Bradley on drums – and although we love Bobby on other records, we're really stunned at his dexterity here – especially on the more boppish numbers, which have the feel of some of Al Haig's best material of the time – some nice dark corners that come not just from Scott's phrasing, but also from his writing too. Titles include the originals "Pee Wee", "Phil's Mood", "Moonbeaux", and "Ode To Monk" – plus versions of "Lullaby Of Broadway" and "Tenderly". 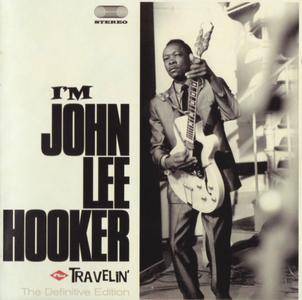 Two classic Vee-Jay albums from blues master John Lee Hooker! One of the great blues collections of the post-World War II era. John Lee Hooker developed a “talking blues” style that became his trademark. Though similar to the early Delta tradition, his metrically free approach and unique sound would make him a staple of the Detroit blues tradition. Often called the “King of the Boogie”, Hooker’s driving, rhythmic approach to guitar playing has become an integral part of the blues. 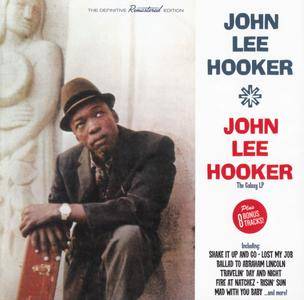 This Soul Jam release presents one of Hooker's most difficult to find albums on CD, the eponymous John Lee Hooker. It was originally released in 1962 by the Fantasy Records' subsidiary Galaxy label. The album includes a selection of hard-to-find recordings taped with his electric guitar during different sessions in the 1950s, all of them produced by Bernard Besman, the man who helped define Hooker's recorded sound, which has often relied upon heavy walking beats, boogies, and an eerie atmosphere. In addition to the original masterpiece, this remastered collector's edition also contains 8 bonus tracks from the same period. A slightly odd, transitional release, 1966's Workin' finds organist Shirley Scott moving away from the small-combo format she worked in (most often with husband Stanley Turrentine) during the early '60s into slightly larger arrangements more in keeping with the mid-'60s trend toward groove-based soul-jazz in which she was the primary, and usually only, soloist. Tunes like "Autumn Leaves," which is practically a solo performance with absolutely minimal bass and drums (perhaps a nod to pianist Bill Evans, who did the tune regularly in a similarly stripped-down fashion), sit next to bluesy vamps like the extended, smoky "Chapped Chops" and gospel workouts like a groove-oriented version of the old church standard "Down By the Riverside," on which Scott sounds uncomfortably like the little old lady who plays choppy, repetitive, bass-heavy organ runs at the baseball stadium. 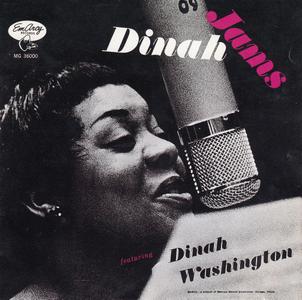 Recorded at the start of Dinah Washington's climb to fame, 1954's Dinah Jams was taped live in front of a studio audience in Los Angeles. While Washington is in top form throughout, effortlessly working her powerful, blues-based voice on both ballads and swingers, the cast of star soloists almost steals the show. 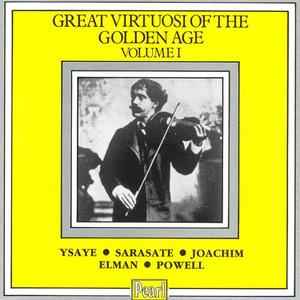