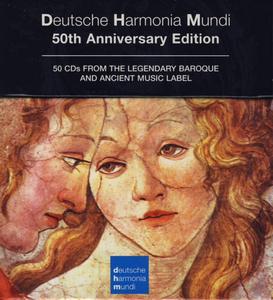 A beautifully-packaged 50-disc box set, released to celebrate the 50th anniversary of Deutsche Harmonia Mundi, one of the most important and adventurous early music labels. The set contains 50 classic recordings of baroque and ancient music, chosen to represent the breadth of this huge and varied catalogue and each disc is slip-cased with artwork replicating the original CD or LP artwork. 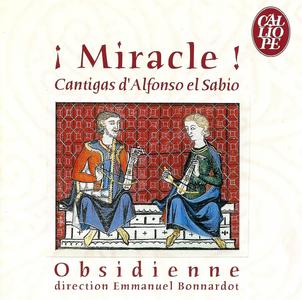 
In the thirteenth century, King Alfonso el Sabio (the wise), gathered together in his 'Cantigas de Santa Maria' four hundred songs (cantigas). These mystical, non-liturgical pieces were sung at various festivities, sometimes - as we see from the illuminated manuscripts - accompanied by dancing. Their form, verses with dialogue between texts and instruments, and so on. The 'Cantigas' involve celebration, dancing, storytelling, tales of miracles. The language used is Gallego-Portuguese, the language of lyric poetry at that time in the Iberian Peninsula. 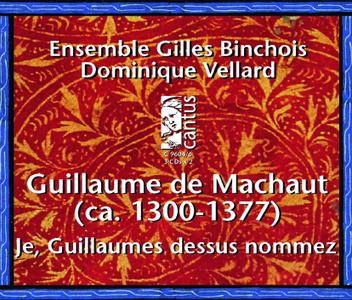 Guillaume de Machaut (c. 1300 – April 1377) was a medieval French poet and composer. He is regarded by many musicologists as the greatest and most important composer of the 14th century. Machaut is one of the earliest composers on whom substantial biographical information is available, and Daniel Leech-Wilkinson called him "the last great poet who was also a composer".[This quote needs a citation] Well into the 15th century, Machaut's poetry was greatly admired and imitated by other poets, including Geoffrey Chaucer. 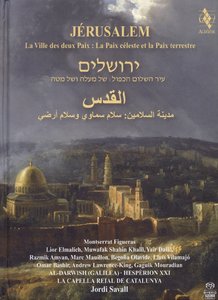 Jordi Savall, performer, researcher, and promoter of early music, has become known for beautifully produced thematic collections organized around topics as diverse as the worlds of Miguel Cervantes, Christopher Columbus, and Caravaggio, performed by his ensembles Hespèrion XX (and XXI), and La Capella Reial de Catalunya, and recorded on his own label, Alia Vox. This immensely ambitious project, Jerusalem: City of the two peaces: Heavenly Peace and Earthly Peace, consists of two SACDs and a sumptuous book in eight languages, French, Spanish, English, Catalan, German, Italian, Arabic, and Hebrew, that includes a wide assortment of intriguing essays.

SEON (Studio Erichson) is a period music label by the legendary producer Wolf Erichson. Erichson founded the label in 1969 as one of the first labels dedicated only to authentic music. The recordings were made with the best available recording techniques of the time and still deliver a high quality product in line with today's standards. This special boxset offers all SEON CD reissues from the late 90s on 85 CDs in a limited edition boxset. 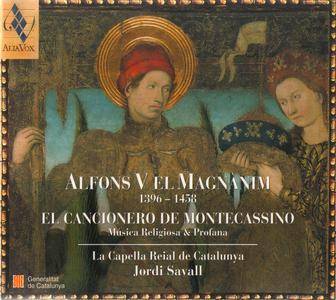 The works on this 2-CD set all come from a single source: a document called "Cancionero de Montecassino" which is believed to contain works composed between 1430 and 1480. Somehow the document has survived down through the centuries; it was almost lost when the Abbey where it was stored was bombed in 1944. Luckily the document survived so that this amazing CD set could be recorded by the - also amazing - Le Capella Reial de Catalunya. This CD is the second in a series entitled "Musicas Reales", the first of which being "Carlos V" containing works mainly from the 16th century. If you enjoyed that one, then "Alfons V el Magnanim" will be a welcome addition to your CD spinner. 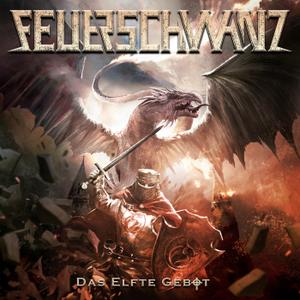 FEUERSCHWANZ, the German folk-rock act from Erlangen, have been a great success in the folk community for over 15 years. Their rich discography now gets a ninth addition in “Das Elfte Gebot,” out on 26 June 2020 through Napalm Records. The deluxe version comes with an extra album “Die sieben Todsünden,” filled with a variety of different cover songs in the trademark FEUERSCHWANZ style. 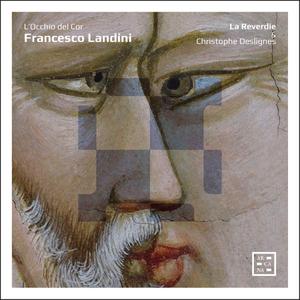 Francesco Landini was the most famous Florentine Trecento composer, known for being a multi-instrumentalist, notably a virtuoso on the organ. As known, he lost his sight at the age of 7 but, despite his disability, he excelled in the study of music and all liberal arts. Might the condition of blindness have affected the poetic production of Landini? La Reverdie together with Christophe Deslignes, investigate this hypothesis, with a new project that presents both well-known masterpieces and pieces never recorded before, searching for signs that might be eventually impressed in the verses and the music of Magister Coecus by the loss of his sight. 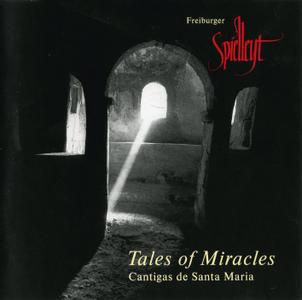 Tales of Miracles — wonderful and magical stories from the Spanish Middle Ages based on the famous "Cantigas de Santa Maria". A colorful fusion of medieval and contemporary music reveals a distant dream-like world, whoise threatening specters and demons Maria defeats with her miraculous powers. The melting voices with historic, ethnic and electronic instruments imbues the Cantigas with a spirituality that trascends time. 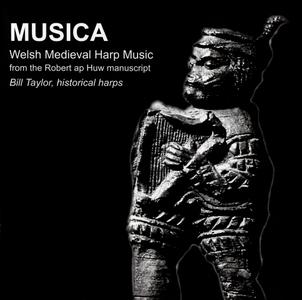 In 1613 Robert ap Huw of Anglesey copied part of William Penllyn’s manuscript of harp tablature. This is the earliest surviving body of European harp music and contains Welsh bardic harp music from the 14th – 16th centuries. A combination of scholarship and imagination has enabled the reconstruction and interpretation of this unique music, played on historical harps. 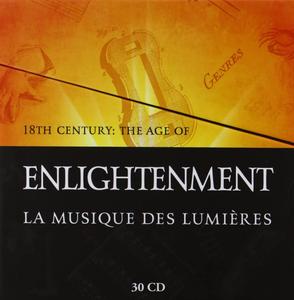 The eighteenth century is probably the most extraordinary period of transformation Europe has known since Antiquity. Political upheavals kept pace with the innumerable inventions and discoveries of the age– every sector of the arts and of intellectual and material life was turned upside down. Between the end of the reign of Louis XIV and the Revolution of 1789, music in its turn underwent a radical mutation that struck at the very heart of a well-established musical language. In this domain too, we are all children of the Age of Enlightenment: our conception of music and the way we ‘consume’ it still follow in many respects the agenda set by the eighteenth century. 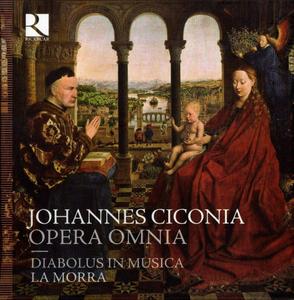 Active in Venice and Padua at the beginning of the 15th century, Johannes Ciconia was undoubtedly the most important composer of this transitional period. Born in Liège and trained in the principles of the French and Italian Ars Nova, he played a considerable role in the musical development that led little by little towards the Renaissance. 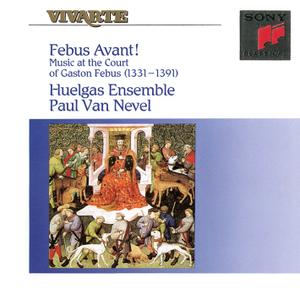 The Huelgas Ensemble was founded by director Paul Van Nevel in 1971. It has specialized in choral music, frequently with instrumental support, from the thirteenth century on to the early Baroque. Their recordings of the High Renaissance have been especially prized. They have also been pioneers in the performance of the difficult Ars Subtilior repertory of the late medieval era. 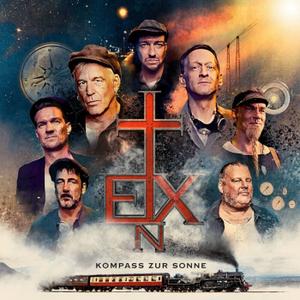 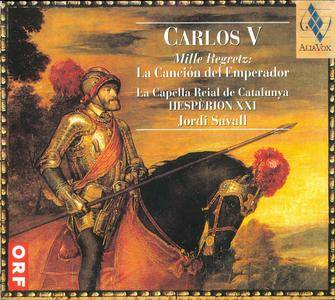 Jordi Savall has brought us yet another treasure on his own Alia Vox label, this time a mixed bag of music by Reformation Era composers and a handful of slightly earlier works. It’s all taken from a concert program Savall gave last year under the aegis of “greatest hits of the court of Charles V”. The composers presented are mostly court musicians for that Holy Roman Emperor, but Josquin and Heinrich Isaac also are included, the latter as a nod to Charles’ grandfather, Maximilian I, who was responsible for getting Charles the crown. Savall combines his first-rate instrumental ensemble, updated to Hespèrion XXI, with his own vocal group, La Capella Reial de Catalunya. The results are captivating. Savall’s musicians are tops in the field, and their collective talents, constantly on display in this varied program, are simply a joy to hear.