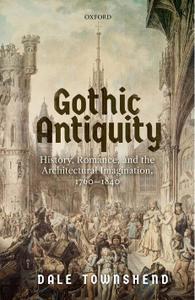 Gothic Antiquity: History, Romance, and the Architectural Imagination, 1760-1840 by Dale Townshend
English | November 19th, 2019 | ISBN: 0198845669 | 432 pages | True PDF | 3.62 MB
Gothic Antiquity: History, Romance, and the Architectural Imagination, 1760-1840 provides the first sustained scholarly account of the relationship between Gothic architecture and Gothic literature (fiction; poetry; drama) in the late eighteenth and early nineteenth centuries. Although the relationship between literature and architecture is a topic that has long preoccupied scholars of the literary Gothic, there remains, to date, no monograph-length study of the intriguing and complex interactions between these two aesthetic forms.

Equally, Gothic literature has received only the most cursory of treatments in art-historical accounts of the early Gothic Revival in architecture, interiors, and design. In addressing this gap in contemporary scholarship, Gothic Antiquity seeks to situate Gothic writing in relation to the Gothic-architectural theories, aesthetics, and practices with which it was contemporary, providing closely historicized readings of a wide selection of canonical and lesser-known texts and writers. Correspondingly, it shows how these architectural debates responded to, and were to a certain extent shaped by, what we have since come to identify as the literary Gothic mode. In both its 'survivalist' and 'revivalist' forms, the architecture of the Middle Ages in the long eighteenth century was always much more than a matter of style.

Incarnating, for better or for worse, the memory of a vanished 'Gothic' age in the modern, enlightened present, Gothic architecture, be it ruined or complete, prompted imaginative reconstructions of the nation's past—a notable 'visionary' turn, as the antiquary John Pinkerton put it in 1788, in which Gothic writers, architects, and antiquaries enthusiastically participated. The volume establishes a series of dialogues between Gothic literature, architectural history, and the antiquarian interest in the material remains of the Gothic past, and argues that these discrete yet intimately related approaches to vernacular antiquity are most fruitfully read in relation to one another.