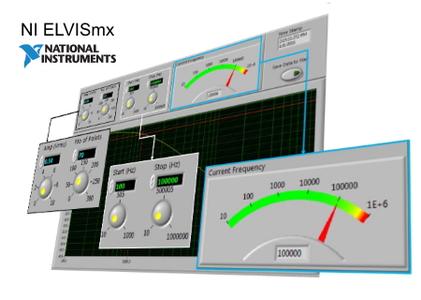 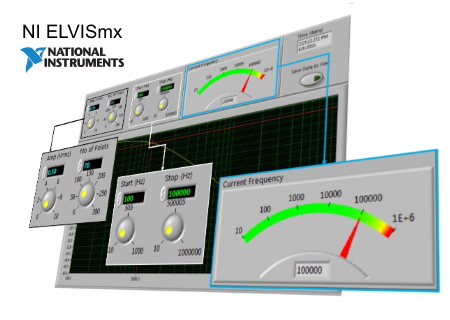 NI ELVISmx is the application software that supports the National Instruments Educational Laboratory Virtual Instrumentation Suite II/II+ (NI ELVIS II/II+) and the NI myDAQ. These devices use the ELVISmx LabVIEW-based software instruments to provide the functionality of a suite of common laboratory instruments.

Learn the basic principles of an oscilloscope, an instrument that displays a voltage waveform


Learn how to use the NI ELVISmx Oscilloscope ("Scope" on the NI Instrument Launcher) as implemented for the NI myDAQ. With this application you can view the waveforms on the pair of analog inputs "AI0" and "AI1" as well as the left and right channels of "Audio In".


Since 1976, National Instruments has equipped engineers and scientists with tools that accelerate productivity, innovation and discovery. NI’s graphical system design approach to engineering provides an integrated software and hardware platform that speeds the development of any system needing measurement and control. The company’s long-term vision and focus on improving society through its technology supports the success of its customers, employees, suppliers and shareholders.

Supported Operating Systems
NI ELVISmx 19.0 supports the following operating systems:
- Windows 10 (version 1809)/8.1 Update 1*/7 SP1**
- Windows Server 2012 R2*
- Windows Server 2008 R2 SP1**
* NI software installs VC2015 Runtime and .NET 4.6.2. Windows 8.1 and Windows Server 2012 R2 require Microsoft updates to support these items. Refer to Microsoft KB2919442 and KB2919355 for more information about how to install these updates.
** NI software is signed with a SHA-256 certificate. Windows 7 SP1, Windows Embedded Standard 7 SP1, and Windows Server 2008 R2 SP1 require Microsoft updates to support SHA-256. Refer to Microsoft KB3033929 for more information about how to install this security update.
Note
- In 2016 NI ELVISmx dropped support for Windows Vista, Windows XP, Windows Server 2003, and installations of Windows 7 without any service packs. NI ELVISmx 19.0 will not install or run on an unsupported OS. You cannot deploy or distribute applications that use NI ELVISmx 19.0 to an unsupported OS. Additionally, after installing NI ELVISmx 19.0, you cannot use any installers built on this computer with any version of LabVIEW, LabWindows/CVI, NI TestStand, or Measurement Studio on an unsupported OS.
- Support for Windows 32-bit operating systems may require disabling physical address extension (PAE).
- Refer to NI ELVISmx Drops Support for Windows 7 (32- and 64-Bit), Windows Server 2008 R2, and All 32-Bit Windows Operating Systems in 2021 for information about future OS support.
Software Requirements *
You must have NI-DAQmx 19.0 or later installed to use NI ELVISmx 19.0. NI ELVISmx 19.0 installs NI-DAQmx 19.0 by default. NI ELVISmx 19.0 is used with LabVIEW 2016 or later. If you are using NI SignalExpress, you must use version 2014 or later. If you are using NI Multisim, you must use version 13.0 or later.
Note: Because several of the NI ELVISmx instruments run the device at maximum speed, NI ELVIS II Series and NI myDAQ devices must be used with Hi-Speed USB interfaces.
* NI ELVISmx is not supported in LabVIEW (64-bit), but NI ELVISmx software instruments are still available for use. For full programmatic functionality with LabVIEW and NI ELVISmx, you must have LabVIEW (32-bit) installed on a Windows 10/8.1/7 (64-bit) operating system.