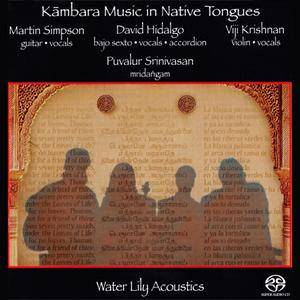 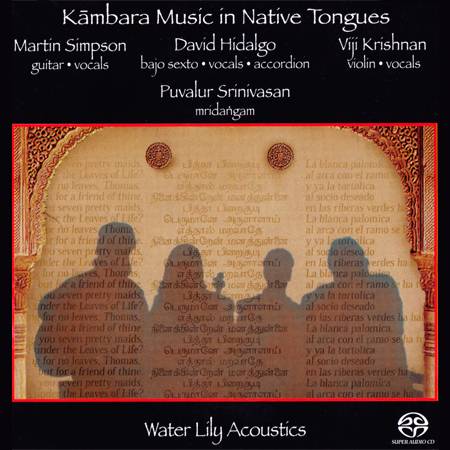 Herein is an attempt to blend aspects of folk-rock with that of Karnatak music. Multi-instrumentalist Hidalgo performs on bajo sexto and accordion while Simpson plays steel and acoustic guitars to which Krishnan’s violin and Srinivasan’s mridangam add a distinct Karnatak hue.

Continuing in Water Lily Acoustics' series of sitting down musicians from different musical traditions to find common ground (which reached its pinnacle with the awe-inspiring collaboration of Ry Cooder and V.M. Bhatt on A Meeting by the River), Kambara Music joins guitarist Martin Simpson with Los Lobos singer/guitarist David Hidalgo, violinist/vocalist Viji Krishnan, and mridangam player Puvalur Srinivasan. It is an intriguing combination, but it is not as effective as one would have hoped. The first problem is the choice of material. The group has elected to open with Richard Thompson's "Waltzing's for Dreamers," with Simpson himself singing the tune's folky, bittersweet melody. Although his guitar playing could arguably rival Thompson's own, vocally he does not have the depth of expression necessary to pull off this great song. Simpson's voice is simply not up to snuff, and considering that Hidalgo, who is a very soulful singer (and a proven strong interpreter of Thompson's material at that) is present on this date, the production decision made here doesn't make much sense. The Los Lobos frontman, also a great guitar player in his own right who plays no guitar on this record, instead contributes wistful accordion in keeping with the spirit of the Mitchell Froom-supplied harmonium on the original. Where this group succeeds is in the long, hypnotic repetition of songs, such as Hidalgo's "The Slow Pageant," which, true to its name, unfolds deliberately and seductively as Simpson and Krishnan trade simple melodic lines over Hidalgo's bajo sexto ostinato and Srinivasan's gentle percussion. Producer Kavichandran Alexander's pretentious liner notes speak of this music as being self-consciously healing music. Whether this is true or not is not a matter for this reviewer (or any reviewer) to decide, but what can be said is that this is very unassuming music, not likely to turn any heads. Additionally, the recording itself is not as good as one would hope, especially considering the notorious lengths that Water Lily goes to to assure that only the highest quality analog recording equipment is used. Overall, there are some nice moments here, but it functions better as a sort of penumbra to Simpson and Hidalgo's work, and not as an introduction or as a prime exhibit of their talent.