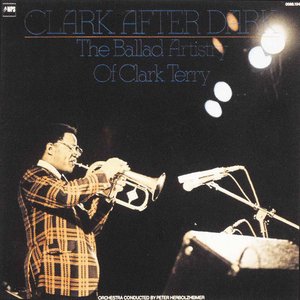 "Clark After Dark" was recorded in London in September, 1977 and, as the title suggests, features Terry playing flugelhorn over orchestral arrangements of mostly familiar ballads. The program includes 'Misty,' 'Nature Boy,' 'Georgia On My Mind,' 'November Song,' 'Clark After Dark,' 'Willow Weep For Me,' 'Yesterdays,' 'Emily,' 'Angel Eyes' and 'Girl Talk.' Besides Terry, the only other musician identified individually is conductor Nat Peck, who's also credited with playing piano, despite being best known as a trombonist.

Clark Terry's 1977 studio date with an orchestra conducted by Peter Herbolzheimer might very well fall into the easy listening category were it not for his brilliant improvisations on fluegelhorn, which he plays throughout the session. Most of the material consists of classic songs that Terry was undoubtedly very familiar with by the time of this 1977 recording, including "Misty," "Willow Weep for Me," "Angel Eyes," and "Yesterdays," with the arrangements all having pretty much a low-key, late-night feeling, hence the album title. Producer Mike Hennessey co-wrote "November Song" with Willi Fruth, a ballad with swirling strings; and Herbolzheimer contributed "Clark After Dark," a tasty blues that is a good deal looser than most of the rest of the album, which also features great solos by pianist Gordon Beck and trombonist Dave Horler, as well as some great muted horn from Terry. The loping "Girl Talk" showcases tenor saxophonist Tony Coe and guitarist Martin Kershaw briefly. While this isn't one of Clark Terry's most essential LPs, his flawless playing make it a worthwhile investment – if you can only find it.